When I was first elected to the National Executive of the ACTA, I found it hard to believe that the idea of a National Ground had been a topic of many, many years but nothing had ever been done in real terms to see this as a priority, or even worthy of planning. On my election in 1992 as National President, I resolved that. I would do all I could to see the National Ground become a reality and began putting plans in place to achieve this.

Also on the National Executive at the time was Bill Jones who held the position of Chairman of the Finance Committee. Bill, I was quickly to learn, was as keen as I was on establishing a National Ground. We gathered support and soon began visiting Councils and State Governments who we believed would possibly assist us.

We visited areas at Albury, Deniliquin, Moama and Adelaide. We became aware that the Wagga Wagga City Council were keen to meet with us. I have no doubt that Bill and Barney Rooke were instrumental in this. A small group visited Wagga and were greeted with open arms and an offer was put to us that was not matched elsewhere in Australia. Briefly the Wagga Council offered us the land on which our National Office sits for the princely sum of $1.00, no commitment attached. Instrumental in the Council at the time were Mayor John Harding  and his deputy, Kay Hull. With support of fellow Executive members Allan Kenny, Rob Nugent, Ron Traill, Graham Michell, Andy Sanders and Tom Meadows it was only a matter of time before our Office in Mount Waverly was on the market. The ACTA had well and truly outgrown this office that had been purchased during a building boom for approximately the sum of $385,000.00.

It soon became apparent we would never sell for anywhere in the vicinity of this amount. On advice from a professional real estate agent we sold at a substantial loss but we were on the way to Wagga with a belief we would be justified in our actions in the future. Both Bill and I were openly criticised for what some termed inexplicably poor business sense and were openly accused of squandering a huge part of ACTA capital from which the Association would never recover.

With the land secured in Wagga we employed ACTA member, Col Burt as builder and the National Office was under way. Unfortunately Col was never to see the Office and Nominations Offices fully completed, as he was found deceased in the Nomination Office as a result of a heart attack. We had met with the Wagga Gun Club and had reached an agreement with them for joint tenancy of their shooting ground and we came to a satisfactory agreement in the sale and purchase of Wagga’s plant and equipment. In August 1999, Fred Rapley and Dave Jocelyn began the task of upgrading all trap and skeet grounds.

Whilst the National Office was under construction we moved into temporary premises at the corner of Morgan and Baylis Streets. Our new National Office in Copland St, Wagga Wagga was officially opened on Tuesday the 11th April 2000.
Glenn Woodhatch

On the cover: Zarah & Bruce Powell at Bruce’s Induction into the QLD CTA’s Hall of Fame 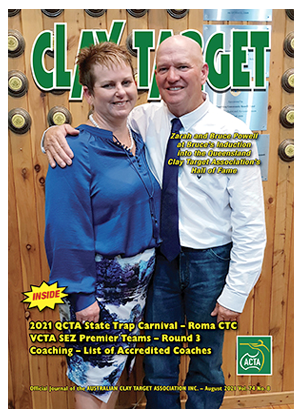